Hi all, whilst Will, my partner, has introduced our ‘blooming’ business and said a little about himself , I thought I would introduce myself and tell you all a little about me! I’m Lauren and I am currently working as a primate carer at Monkey World. My passion lies with animals and I have a BSc (Hons) in Animal Management and, like Will, obtained my qualification at . I did some volunteering with animals in various places such as , the National Seal Sanctuary in and more recently ! I then went on to work at as a hoof-stock keeper, working primarily with giraffe and zebra. My job currently is fantastic and very rewarding as, for those of you who aren’t familiar with Monkey World, I work with rescued primates. I work mostly with chimpanzees that have been subjected to the laboratory industry, pet trade, entertainment industry and most frequently ones that have been kept and used as photographer’s props on tourist beaches. These chimps were mistreated and led a very unnatural lifestyle and Monkey World aims to take them in and rehabilitate them into natural groups. I love my job!

It’s becoming more and more common to see programmes on TV about the destruction of our natural world and all of the species that inhabit it (or are trying to!). The focus is mostly on primates, marine mammals, many large African species and other fascinating creatures, but when I say ‘the species that inhabit it’ I also mean flora as well as fauna. There are thousand of plant species already lost due to deforestation and human impact. Fortunately we still have a huge amount left that needs to be protected and better understood. These plant species are vital for our world and its ecosystems and they not only support animal species but also millions of insect species. This is where, I believe, Blooming Wild will lend a helping hand. We aim to produce plants, in an environmentally friendly way, that provide a food source for our native insect species that are struggling.

A species that is particularly struggling is our native honey bee, the Western honey bee, Apis mellifera. One major threat our honey bees face are the introduction of other non-native species which are causing the loss of genetic diversity of our own native species. Another problem that our honey bees are facing is the more recent problem of Varroa jacobsoni, a mite that attack larvae, pupae and adults. As if these problems aren’t enough of a struggle, our honey bees are running out of places to collect nectar and pollen, such as wild flower meadows (which can house 20 or more different plant species per square metre!). Wild flower meadows were once abundant across Great Britain,  but now due to intensive agriculture and monoculture there are less and less of these wildlife havens.

At Blooming Wild we will aim to provide plants that bees, as well as butterflies and other insects, are attracted to and essentially rely on for survival. By providing these plants we hope to encourage more people to adopt a more ‘naturalistic’ way of gardening, if we all do our bit we may start to see an increase of wildlife in our gardens and you may be lucky enough to have a wildlife haven of your own!

Email ThisBlogThis!Share to TwitterShare to FacebookShare to Pinterest
Labels: about us, bees, wildlife

Birthdays are great when your a gardener. Not only do you get lots of lovely gardening presents but the loved ones that have spent their hard earned money can rest safe in the knowledge that every day for years to come you will be making good use of them whilst fondly thinking of them.

Amongst the presents this year, was a proper wheelbarrow. Thank god! I can now stop using my cheap mickey mouse wheelbarrow that has plagued my daily slogging of muck for many weeks! Thanks mum and dad.

A friend also gave me the best cake ever! 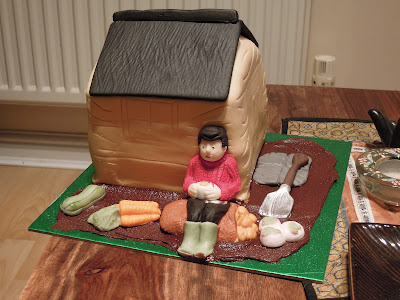 After marvelling at the skill it must have taken to make, it almost seemed a shame to eat! Needless to say it was very tasty...

We are a nursery based in North Dorset selling herbaceous perennials and ornamental grasses. We started this blog to share our journey with anyone who may find it of interest. Enjoy!